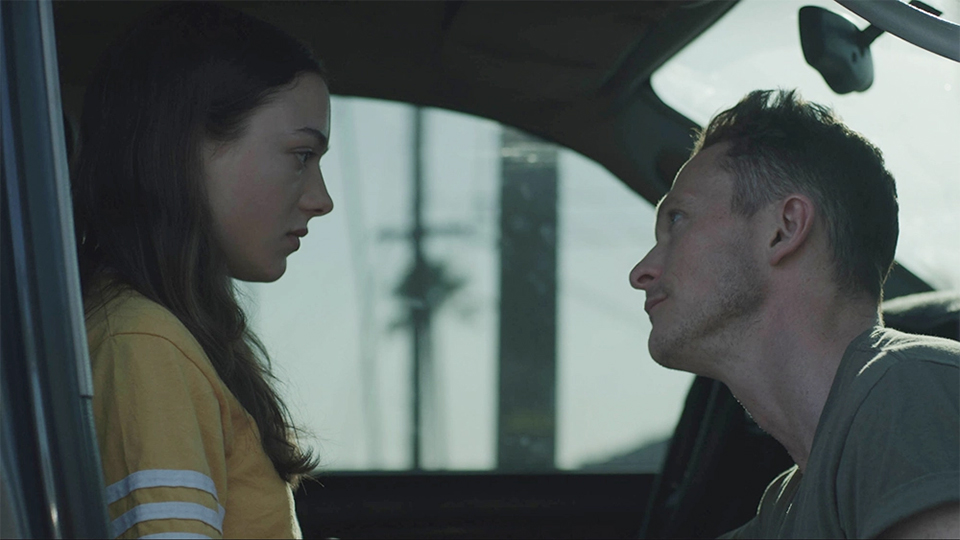 Palm Trees and Power Lines review – A tour de force exposé on the exploitation, trauma and corruption of innocence

Breaking down Palm Trees and Power Lines into a review is challenging, much like watching the film itself. Not for lack of quality, shoddy scripting or bland set design – but for how masterfully the film descends into an unsettling and bleak story of manipulation, grooming and emotional abuse. When Red Rocket released earlier this year, it came with cute pastel colours, Instagram filter-style cinematography and delightfully, darkly comedic Simon Rex. Palm Trees and Power Lines deals with the same topics but without any of the trimmings – instead serving you with a heart-breaking cycle of abuse.

The story follows Lea, played wonderfully by Lily McInerny, a teenager feeling disconnected from her life, her obnoxious friends and her mostly absent mother. At least, that is until she meets Tom, played by Jonathan Tucker. After a failed attempt at absconding from paying a diner bill, Tom steps in like a knight in not-so-shining armour to defend her before gently coercing her into a ride home. From there, romance blossoms, despite his age of 34 and hers of 17.

Hiding this relationship from her family and friends, she starts spending more and more of her summer break with her new boyfriend – a man who seemingly listens to her, cares for her, and desires to protect her. For the first time in her life, Lea feels wanted. She isn’t aware she is trapped in a cycle of emotional abuse until it’s too late, until the jaws of Tom’s manipulation close in around her.

What director Jamie Dack and cinematographer Chananun Chotrungroj, accomplish in the portrayal of Lea makes the overall experience all the more gut-wrenching. At times, she is cast to look like one half of a perfectly natural relationship – the kind of relationship she so deeply wishes she was in. Yet, at times, none more so than when Tom has told of his intentions to prostitute the 17-year-old Lea, as she stands frozen with fear at the back of her hotel room awaiting the client, she has never seemed more child-like – drowning in a sea of dread and isolation.

All of this lends to the overall mood of Palm Trees and Power Lines, which evolves seamlessly with Lea’s state of mind. It’s dark, to begin with, as she casually has sex with one of her friends in the back of a car before he discards her in the same way he does with his condom. Yet once her romance with Tom begins, the film and the mood feel lighter in a way – we know as an audience that something dark and pervasive is taking place, but Lea’s world feels better. She feels understood. But as the run-time ticks over, as Lea begins to lose trust in her newfound love, as the manipulation starts to take hold, Dack drives us firmly back into the darkness – a place where Lea has lost herself by the film’s end.

Some credit does need to make its way to both leads. McInerny, as mentioned previously, portrays the destruction of her own innocence with incredible pathos, marking the start of a career with star potential. Meanwhile, Jonathan Tucker takes on a challenging role and never misses a beat. His enigmatic and mysterious character intrigues the audience, just as it does Lea – pulled in by his searing blue-grey eyes that bore their way through you with a glance. The hints of control and manipulation begin from Tucker with gentle commands instead of questions, subtle at first, but just as Lea feels – Tom is a magnetic presence that you want more of. He’s a monster, but not one of the snarling horns and cloven hooves – he’s the monster next door, one woman face far too often.

Palm Trees and Power Lines is a bleak, pessimistic, tragic story. It’s also profoundly real and a story that needs to be seen. A feature-length debut from Jamie Dack that will burn its way inside you and leave you disquieted when the credits roll.

Palm Trees and Power Lines review – A tour de force exposé on the exploitation, trauma and corruption of innocence
4.5