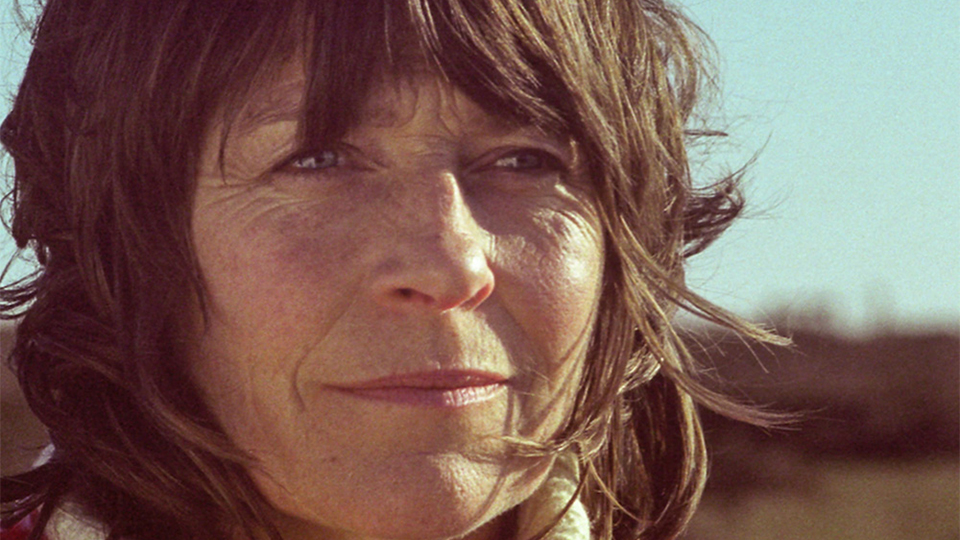 Enys Men review – An eerie and unconventional piece of horror

Following up from his electrifying feature debut Bait, Cornish director Mark Jenkin returns with Enys Men, an atmospheric horror that he describes as ‘eco-sophical’. His breakthrough was a deeply personal story about tensions in a Cornish town between locals and tourists as a community is slowly pulled apart by gentrification; timely yet timeless in its experimental filmmaking. But while Enys Men has themes on memory and reflecting on what has gone before, like fisherman Martin in Bait, Jenkin develops these in an ode toward the elliptical style of Nicolas Roeg and the ghost stories of M. R. James.

Set in 1973 on a remote Cornish island, a wildlife volunteer (Mary Woodvine) is living a lonesome life in a quaint cottage with only a transistor radio that occasionally crackles into life and a copy of Teddy Goldsmith’s ‘A Blueprint for Survival’ for company. Every day she records daily observations of a group of rare flowers growing on the cliff edge as well as, superstitiously, dropping a stone down the shaft of a tin mine, waiting for the sound of a faint splash to occur. For the opening half hour, we watch this daily routine being carried to clockwork-like perfection – record flower, drop stone, listen to the radio, repeat. But as she uncovers a lichen growing on one of the flowers, she starts to have surreal visions about the island, from dead miners to a group of young girls dressed in virgin white prancing out of the cottage. Are these all premonitions or waking nightmares?

On an aesthetic level, it is jaw-droppingly gorgeous. Shot using the same clockwork Bolex camera from Bait, it moves away from the twitchy black-and-white of its predecessor to delicious 16mm colour, heightening the idyllic setting and the volunteer’s metaphysical happenings. In addition, Jenkin’s sound design and ethereal synth score are sonically enthralling. Shot silently, the creative freedom in conjuring an entire soundscape allows the most banal noises, such as squelching boots and creaking opening doors, to become the most transportive in their slight detachment from reality. This is filmmaking in its most stripped-back form, making the island viscerally come alive.

As well as its hand-crafted visuals, Enys Men is a film directly linked to a heritage of late 60s to early 70s British horror, particularly Roeg’s Don’t Look Now (one of Jenkin’s favourite films) in the volunteer’s bright red coat, the year 1973 linking back to the film’s release, the crash zooms of certain objects and the intense hallucinogenic montages. The film also pertains to the eerie tranquillity of the 1968 TV adaptation Whistle and I’ll Come to You – the volunteer’s daily hikes across the island that gradually become more disruptive and uneasy in tone, mirrors Professor Parkin’s walks along the English coastline.

But what is most impressive about Enys Men is how Jenkin has not compromised on his methods but rather developed and refined them further to create a unique horror experience of his own DNA and one that is not a pastiche of its own influences. Most of the film is articulated entirely wordless, which sounds demanding, but, like much of Roeg’s work and Bait, visual red herrings and audio cues become notable aids that guide the viewer through its perceived abstractness. Likewise, Mary Woodvine (Jenkin’s partner in real life) is astonishing as the unnamed volunteer, there is a kind of wistfulness behind her pale blue eyes reminiscent of Deborah Kerr in The Innocents, and the ability to express aplenty with very little should not be understated.

As mentioned, memory plays a key role in the narrative as the island’s history becomes intertwined with the volunteer’s own. To a certain extent, you could view Enys Men as another allegory of Cornwall’s gentrification or even how the volunteer’s manifestations showcase the island metaphysically reclaiming its land. And while the film will generate plenty of afterthoughts and some scratching heads, there is an internal logic that will become clearer with further rewatches and musings.

Enys Men review – An eerie and unconventional piece of horror
Verdict
In the crowded space of British cinema, there is no one making films like Mark Jenkin at this very moment, using traditional filmmaking techniques to resurrect film as a physical, if not a fragile, artform and experiment in genre cinema. Enys Men is an unconventional piece of horror, but its eerie solitude will send chills as the credits roll.
5

Next
Saint Omer review – Critically acclaimed at Venice Film Festival, Saint Omer didn’t have the nuance or the depth that was expected.