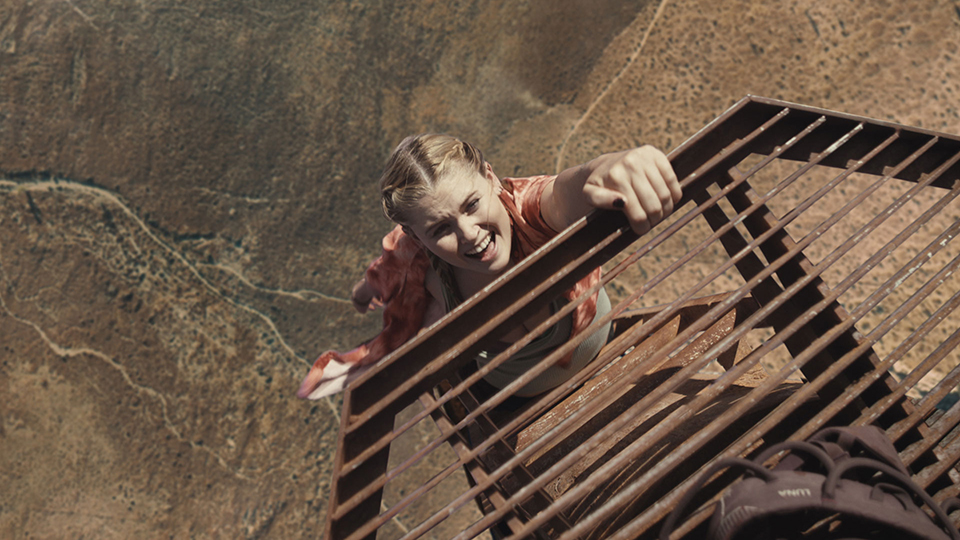 I have never in my life had the urge to do any crazy life-endangering activities. I am the complete opposite of the characters in ‘Fall’, and after watching the film, I have never been happier to be this way. I couldn’t imagine ever climbing a tower like that. My hands were producing an insane amount of sweat from watching this. I would stand no chance doing it myself.

In ‘Fall’, Becky (Grace Caroline Currey) and Hunter (Virginia Gardner), two adrenaline junkie best friends, are climbing a mountain alongside Becky’s husband Dan (Mason Gooding). When Dan tragically falls to his death during the climb, Becky becomes a depressed alcoholic who falls out of contact with Hunter and becomes estranged from her father (Jeffrey Dean Morgan). When Hunter, now a semi-famous YouTuber because of her crazy climbing exploits and some help from Victoria’s Secret, comes back into her life a year later with a crazy idea of climbing a 2000ft TV tower. Becky initially refuses but decides to join her as she doesn’t want to live her life in fear.

‘Fall’ does a fantastic job of constantly showing the danger that these two characters are in. Not just during the climb but from minute one. From seeing bolts in the structure look loose to witnessing vultures eating an animal alive. Not for one minute do you think this climb will end well, and you constantly fear for the lives of the two adrenaline junkies. The anxiety from watching was enough to make me never want to go near another high structure again in my life. This is a credit to the director and cinematographer. They highlight the magnitude of this climb exceptionally well with some crazy vertigo-inducing shots—a film which should be seen on the biggest screen possible to maximise your viewing experience.

When ‘Fall’ is at its best is when it focuses on the actual danger the two adrenaline junkies are in. During the more emotional scenes, it seemed to lose a bit of steam and honestly, that whole plot point could have been completely cut out to help the pacing. It was about 20-30 minutes longer than it should have been. It would have sat better with me if it were just a 90-minute thrill ride. The thrill is where the film shines, and the reduced run time would have helped take focus away from a thin script. The added plot point was a lazy addition which just tried to add some non-needed friction between the pair as if being stuck on a 2000ft TV tower isn’t enough of a complete shit show.

If anxiety-inducing B-movies featuring beautiful actors in Victoria’s Secret push-up bras are your thing, then you’re going to have a blast. A turn off your brain at the door, one-and-done viewing experience.

Next
28 Favourite Films & How They Resonate