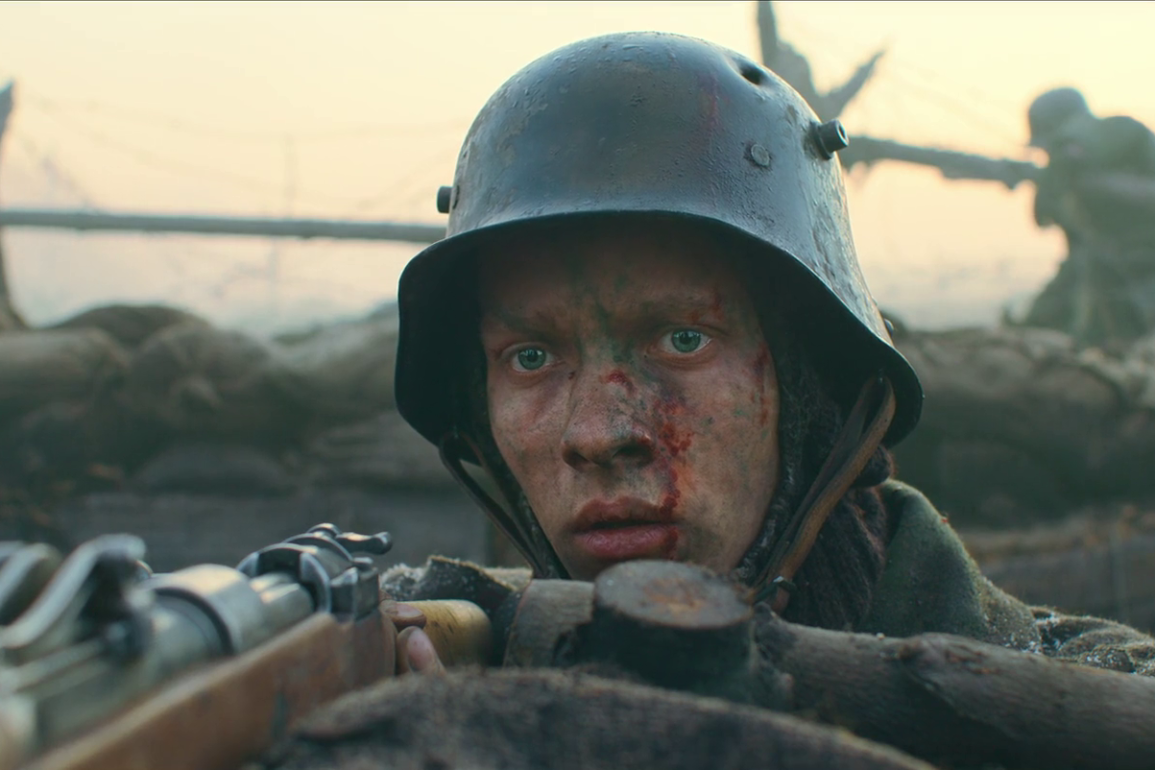 The strongest bond between men is born on the frontline — that’s War Movies 101. There’s something pure and virtuous about the trust soldiers form while battling against an appointed enemy together. It’s the sole positive emotion war can produce. Everything else — glory, pride, honor, patriotism — is just a bunch of foul propaganda super-patriots and army officials feed the young to convince them to enlist and die for their country if they have to. Edward Berger’s latest adaptation of Erich Maria Remarque’s famous novel, All Quiet on the Western Front, has no illusions about the dishonesty and manipulation that fuel the vicious machine of warfare. In fact, all that rings truer the deeper we’re into this two-and-half-hour-long epic.

When we first meet our protagonist, 17-year-old Paul (newcomer talent, Felix Kammerer), he’s filled with naivety and joy to join the German army during the First World War. He and his friends are starry-eyed fools with heads full of unrealistic ideals about what it means to fight for your country. But the cruel reality comes soon enough to scare them straight. After they’re sent to the trenches of the western front in 1917, Paul and his buddies face horror first-hand: flying bullets, deafening grenades, ripped-off arms, legs, torsos, and the chaos of bloodshed inject fear they’ve never experienced into their mind and body instantly. They can’t bear the thought that some won’t make it past that muddy ditch. Paul’s luck is that an experienced soldier named Kat, short for Katczinsky (Albrecht Schuch delivering a standout performance), looks after him from the moment he arrives. Granted, he knows what it’s like to be dropped off in the middle of mayhem as a clueless young man.

Jump to 18 months later, Paul, his pals (those who survived), and Kat make a close brotherhood now. The illusions are gone. They’re painfully aware of the fact that they are dead men walking. By now, the war’s depressive and dispiriting bleakness loudly echoes in their souls, shutting out everything that comes between death and survival. They look worn and thin, struggling to cope with the blistering cold and constant hunger. The highlight of their day is feasting on a goose they stole from a French farmer. This almost barbaric act of eating aptly conveys what an uplifting moment feels and looks like in a time of war.

Despite the many months that passed offscreen — during which these soldiers got to know each other closely — Berger beautifully highlights moments like that to show us the camaraderie they developed. Paul and Kat are like blood brothers — pulled together by killing and survival — who trust each other with their lives. Their intimacy is heightened by acts of kindness, such as Paul reading letters from Kat’s wife out loud since he’s unable to. Their friendship likely wouldn’t exist in this form outside of war, but in a place where they stare into the eyes of demise every day, it’s everything they have. Berger understands this profound and delicate reliance incredibly well and makes it the moral center of his film — which echoes through even in its most gruesome moments.

The reason this becomes increasingly poignant throughout the movie is that Berger puts it in context by depicting an atmosphere around it, which gradually obliterates any affection and warmth. The stylishly constructed cinematography (by James Friend) breathes hopelessness and desolation into every scene. In this arresting visual flair, he draws a palette of colors that are dominantly cold (lots of blue, gray, and green), and the warm ones only occur in the form of explosions, fire, and blood. It’s a potent stylization that All Quiet on the Western Front uses to its fullest to evoke an overwhelming and listless melancholy. Underscored by an unconventionally harrowing, unnerving, and haunting score by Volker Bertelmann — who concocts the barest sounds into raw recurring themes — Berger’s movie is an undeniable testament to the best anti-war films and easily one of the most memorable features of the year.

Through its flesh-and-blood characters and the inhumane futile depiction of slaughter, All Quite on the Western Front poignantly conveys a life’s worth from opposing perspectives. And the message couldn’t be more apparent: there’s no honor or glory in a soldier’s death. It becomes data on a piece of paper. But the loss of one brother to another — and to anyone who ever loved him — is inconceivably heart-shattering.

Previous
She Said review – The investigation that shocked the world

Next
Next Exit review: Mali Elfman’s feature debut is a genre-blending contemplation of trauma and death