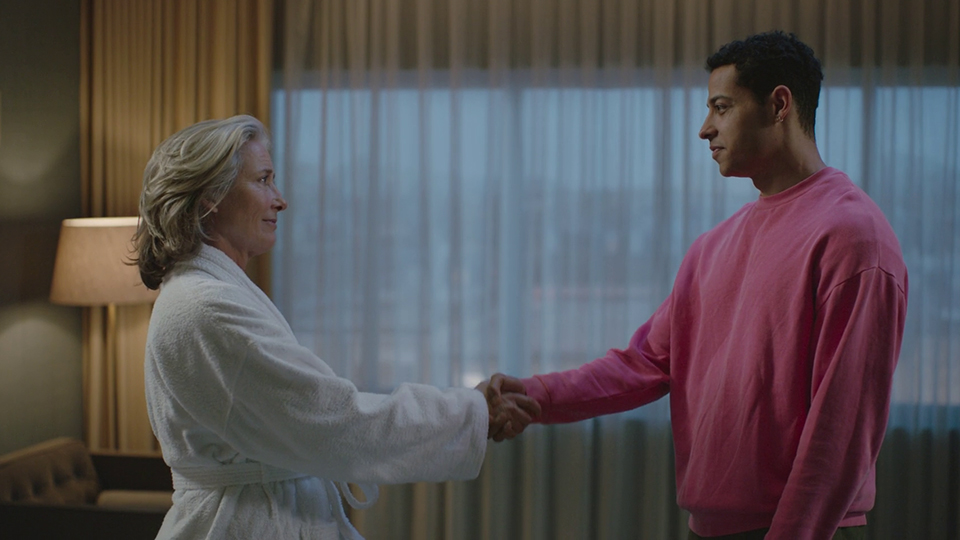 Good Luck To You, Leo Grande review — A triumph in intimacy and body positivity

A few years ago, I met a woman in her late 20s who told me she never had an orgasm. She further explained that sex wasn’t among her priorities, and she hadn’t explored her body and its erogenous zones when she was younger. There was a slightly detectable regret in her voice that suggested if she could start it all over again, she’d do it differently. But she was still pretty young to catch up on what she had missed until that point. Nancy (Emma Thompson), the protagonist in Sophie Hyde’s latest feature, Good Luck to You, Leo Grande, doesn’t have that sort of time. She’s in her 60s and, similarly to that girl above, she never had an orgasm — in fact, the only man she ever slept with was her late husband. Now, she really wants to experience what sex has to offer, and she prefers to do it rather quickly.

So she hires a young sex worker for an entire night in a hotel to go through a list of “sexual goals” she’d like to achieve. The guy’s professional name is Leo Grande (Daryl McCormack at his most endearing), a devilishly handsome 20-something-year-old with spotless etiquette and a body that most men (and thirsty women) would kill for. Leo is nice to a fault — his kind demeanour, effortless confidence, and gentle gestures show that he knows people and understands their desires. He carefully selects every word, doesn’t rush things, and never judges a client. Put it this way: his soft skills are top-shelf, and the fantasy he brings alive with ease is what people pay him for.

On their first encounter, Nancy is so nervous and embarrassed she just wants to get the whole thing over with swiftly. This is the type of situation she can’t control, and it’s driving her crazy (which is why she forced herself into it in the first place). For a woman with her intellect (she’s an RE teacher), it’s awkward to pretend that a hot-ass guy like Leo would fancy her at all. Yet, to her surprise, not only does he level with her intellectually, he brings out a profound intimacy in Nancy that she feared she never had. Despite being as disastrous and clumsy as their first session begins — and going in that direction for quite a while — it ends in success. Yes, the very pleasant kind. And there will be more to come.

It’s obvious right from the start that this one-location two-hander wouldn’t work without chemistry. Thompson and McCormack undeniably vibe with each other — or at least they’re good enough actors to make us believe they do — which sells the plot immediately. But without the smoothly written screenplay (provided by Katy Brand) that balances humour and wit dynamically through dialogue, it would be much harder for the two delivering their best. Thompson subtly conveys all the self-conscious fiddles and underlying urges that Nancy can’t hide in her uneasy yet also delicate behaviour. But it’s McCormack’s tender and profoundly intimate performance that feels more like a revelation. There’s a moment when Leo looks at himself in the mirror and catches a naked vulnerability that cuts to his (and our) core. It’s a disarmingly genuine portrayal by McCormack that makes his character unmistakably sincere and fragile despite the confidence he projects.

Some might find (as some critics have) that Good Luck to You, Leo Grande goes a little too easy on its subject matter. But I’d say its charm and warmth demand the picture to be at least somewhat idealistic. Because that’s the kind of approach and tone that makes this humble feature stand out among contemporary comedy dramas. A movie that so welcomingly embraces body positivity through sensual intimacy — in a culture where body image is such a pressing issue — is a goddamn treasure and deserves to be lifted up. Its message to accept and love your physical self and harmonize it with your inner one is something we should all support wholeheartedly. Because when it comes to desires, it’s never too late to act on them — to seek the kind of satisfaction we all deserve.

Good Luck To You, Leo Grande review — A triumph in intimacy and body positivity
4

Next
The Cinematique Podcast #1 – Alex Billington